APPLICATIONS: ‘The INTENSE Stage 3 CNC ported heads were a very good investment. When they arrived at Havlik's Auto shop on the southwest side of Cedar Rapids they were speechless at how well they were ported, and how clean and beautiful they looked. INTENSE-Racing does good work. And I am impressed.’ – Nick Trask, ’98 Grand Prix GTP

Don't be fooled by our competitor's claims of 'Stage 4' and 'Stage 5' heads. There are good reasons why INTENSE™ Stage 3 CNC Cylinder Heads currently power many of the fastest 3800 FWD cars in North America!

We have now studied and flow-bench tested more than a dozen different 3800 Series II/III head porting designs, and are convinced our Stage 3 heads outperform any other heads on the market without exception. In addition, they're the only head design good enough to use a CNC program for unmatched repeatability from cylinder to cylinder, that just can't be rivaled with hand porting. 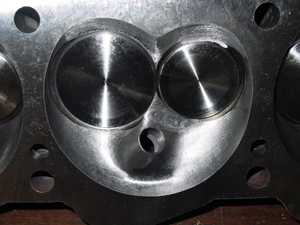 Each head is disassembled, inspected, cleaned and extensively ported. Each head is checked and typically ends up being milled ~ .005" for perfect flatness. Then top quality solid bronze guides are installed and a competition valve job and bowl blending is performed. 1.90" (intake) and 1.57" (exhaust) Manley Severe Duty Generation II Valves, custom made of NK-844 Stainless and XH-428 Stainless respectively are installed. These valves feature hardened tips to prevent mushrooming, even when used in conjuction with stock rockers, and are subjected to a competition valve job and multi-angle radiused. Heavy duty (130 pound) aftermarket valvesprings installed at 1.80" along with Manley titanium retainers. These springs and retainers are STANDARD on all INTENSE™ Stage 3 CNC Cylinder Heads. Our heads are machined to handle valve lifts up to .600". And the combustion chambers (stock = 62 cc, Stage 3 and Stage 4 = 61 cc) are fully polished.

Each head is then painted with your choice of 1966 - 1970 Pontiac Metallic Blue, 1970 - 1975 Buick Red, Aluminum, Black, or Bright Red high-heat engine paint and reassembled (see additional pictures here). By utilizing valvesprings with the stock conical shape, we completely eliminate the possibility of rocker arm to retainer interference found in some other head designs. By properly machining the heads to handle increased valve lifts, we are able to prevent oil seal and valve guide damage that can be caused by cams with gross valve lifts in excess of .525". 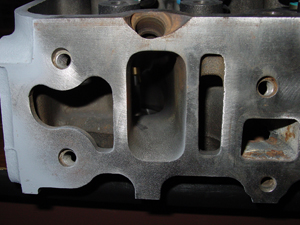 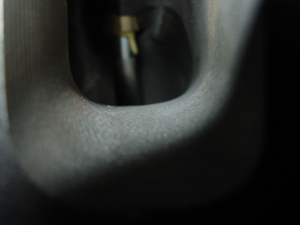 From an airflow standpoint, these heads are without question the best 3800 Series II/III design we have seen:

- When purchasing preassembled heads, a $500.00 U.S. core charge will be placed on this item. The core charge will be fully refunded after your original cylinder heads are returned, disassembled, cleaned and inspected. The returned cylinder heads MUST be from a late 1998 or newer engine as prior to mid-1998, GM used smaller valvespring pilot seats and the heads were prone to cracking at these locations. The core heads must be in rebuildable condition but need not include valves, seats, retainers, springs or keepers.

- INTENSE Stage 3 CNC Cylinder Heads are warranted for a period of ninety (90) days from the date of purchase against defects in materials and workmanship. The warranty provides for replacement cylinder heads only, and does not cover labor or any other costs. Purchaser and Installer assume all liability with regard to any and all damages in any way related to the purchase, installation and/or use of these cylinder heads.

- We strongly recommend the ARP Head Stud Kit with these cylinder heads.

- We strongly recommend the Cometic MLS Head Gaskets with these cylinder heads.

There are currently no customer product reviews for the product.

Be the first to write an online review and share your thoughts with others.

There are currently no reviews for this product.